My sister Minnie, like so many other moms of young children, was looking for a social group for new moms. She left her Silicon Valley web developer job of 8 years to stay at home with her baby, and could not afford to pay for any extra child care. She found out about Blue Sky Family Club from an advertising flyer at the Emeryville Market in the San Francisco East Bay, announcing a new family club.

When she went to check it out with her free visit coupon from the flyer, her baby had a great time. Blue Sky was an upscale cafe, with coffee, beer, and wine, and a big play area with a kids’ and babies gym and great toys. “It was a large open space with natural light. They had a living room area with couches, an art area, a play house area, rock climbing wall, and gym, alongside the cafe.” Sounds great, doesn’t it? Minnie made the decision to pay the $170 fee for a 14 month unlimited membership.

One month later, Minnie got an email. The club would be shutting down. Membership fees would not be returned.

When Minnie first told me this story I assumed it was a sad tale of some half-assed Oakland hippies trying to create a co-operative. However, a little research uncovered a completely different story.

Blue Sky is the brainchild of Sheryl O’Loughlin, a marketing executive and former CEO. She is a high powered executive type who has now defrauded an unknown number of East Bay moms of their money. This is a person who has made a profit and a successful career from marketing to women and specifically to mothers. Apparently she and her husband Patrick are very concerned with “saving the planet” and making mindful decisions about buying organic produce. At the same time as they screw the “little people” out of their hard earned cash. What a great business plan!

Everyday I make my daily decisions mindfully – with an awareness of their potential impact on the environment. Whether it’s supporting my local farmers market and buying local, organic food for my family or working with my colleagues to source a new organic ingredient; I know that every decision matters. Each choice I make is a moment of reflection and an opportunity to lessen my impact on the environment. Through consistent, thoughtful and sustainable decisions, we are collectively changing the world.

The O’Loughlins announced the closure of their business, but apparently have not filed for bankruptcy.

In June 2007, bizjournals.com reported on the O’Loughlins’ plan for Blue Sky to become a local, then a national chain:

It will cost $3 million to open the first club. In addition to investing $100,000 of their own funds, the couple has managed to raise about $300,000 from private individuals in the last three months and they are continuing to look to angel investors and potential restaurant partners for backing. They expect roughly $1 million in leasing and tenant improvement funds from their future landlord. Their goal is to open four additional locations in five years.

Sounds like their venture capital money ran out. I can sympathize with an idealistic business plan and the financial turmoil that comes when an ambitious business plan fails. However, of all the creditors resulting from business failure, the *club’s individual members*, and their target market, should be paid back.

How many members were part of Blue Sky Family Club? I can’t imagine that membership was more than a few hundred. Say it was 300 members paying around 170 each – that’s about $50,000, probably less if you prorate the months of membership that passed for members who joined at different times. Let’s call it 35K. Do we seriously believe that Blue Sky’s founders don’t have that 35K? Why don’t they put their money where their business plan was?

Sheryl O’Loughlin should make the ethical business decision, sell some of her stock or put a second mortage on her house and pay back her investors. She has committed fraud and theft plain and simple. It is the kind of scam that upper class people get away with all the time. And they shouldn’t. Instead they go from board of directors to board of directors, scamming and keeping right on with their ski vacations. While someone who shoplifts a block of cheese goes right to jail and gets their life fucked up even more than poverty already has done. It’s disgusting.

“Doing a startup like this takes a tremendous amount of patience,” she says. “As a business person used to having things happen very fast, it’s like, take a breath, you’re going to get a million nos. You just have to keep plugging and believe in your ideas.”

This is a professional who wants to continue working in parenting-related products and marketing. She is now on the Board of Directors of a eco-food business called Nest Naturals. O’Loughlin’s bad business ethics should be exposed. Why would parents, her target market, trust her business sense after this spectacular failure of capital and basic decency? Who folds a business that has hundreds of members — members who in effect are micro-investors — and doesn’t even bother to declare bankruptcy? There are laws to protect creditors; in this case, a class-action lawsuit seems quite possible.

Blue Sky and other businesses who serve moms of young children should sit up and pay attention – and should not alienate their client base. Studies show that women pay more attention to the advice and information they get from their friends, whether online or off, than they do to corporate marketing or even other media channels. Moms talk, and moms listen to other moms. I would advise the (former) Blue Sky operators Sheryl O’Loughlin and Patrick O’Loughlin that paying back their customers’ membership fees is more than just ethical. It’s good business sense.

I just got this email from my senator. Talk about Generic-Off. How pathetic. Could the Senator’s office at least go to the effort of having *different templates on different issues*?

Or even some actual information content in the email?

Like “Ms. Henry, we have noted your concern on the Iraq War, and would like to let you know that X percent of Californias agree with you. Here is Boxer’s position on the issue, and here is how she plans to vote.”

What earthly use is this to me? I’ll be damned if I can remember what I wrote a letter about, or what petition I signed, in this case. Behold!!!

Thank you for contacting my office to express your views. I believe that all citizens should become involved in the legislative process by letting their voices be heard, and I appreciate the time and effort that you took to share your thoughts with me.

One of the most important aspects of my job is keeping informed about the views of my constituents, and I welcome your comments so that I may continue to represent California to the best of my ability. Should I have the opportunity to consider legislation on this or similar issues, I will keep your views in mind.

For additional information about my activities in the U.S. Senate, please visit my website, http://boxer.senate.gov. From this site, you can access statements and press releases that I have issued about current events and pending legislation, request copies of legislation and government reports, and receive detailed information about the many services that I am privileged to provide for my constituents. You may also wish to visit http://thomas.loc.gov to track current and past legislation.

Again, thank you for taking the time to share your thoughts with me. I appreciate hearing from you. 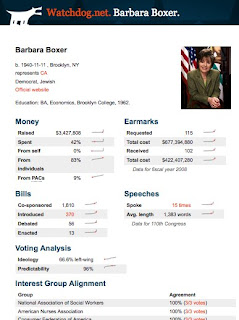 How hard could it be to hire someone to write you some decent “issue tracking” and letter writing software to keep your constituents informed without sounding like a mealy-mouthed robot talking to another, much stupider robot?

Meanwhile you might like to be aware that watchdog.net is useful, maybe more like what I’m looking for as a constituent than a flail -n- trawl through the entire Library of Congress.

Obviously I still end up voting for Boxer no matter what, but isn’t the idea to make me *really, really, really* support the politicians in office? Maybe even donate to them, because they’re awesome?