Eight amazing fierce feminist panelists have confirmed their participation. They include: 5) Mimi Schippers, Tulane University professor, blogger, and author of Rockin’ Out of the Box: Gender Maneuvering in Alternative Hard Rock – http://tulane.edu/liberal-arts/sociology/schipper-profile.cfm and
http://www.marxindrag.com. I’m going to be speaking at ETech in a couple of days about technology, culture, and disability/access invention. I’m all fizzy with enthusiasm and can’t wait to give the talk and see what people about afterwards!

If you’re curious, Here’s the talk description, and I’ll put slides up on Thursday or Friday.

Wheelchairs aren’t any more complicated than bicycles, but they cost a ridiculous amount of money. They shouldn’t. Neither should other simple accessibility and mobility equipment. In the U.S., people with disabilities who need adaptive devices depend on donations, charitable agencies, insurance, and a corrupt multi-billion dollar industry that profits from limiting access to information.

With a cultural shift to a hardware DIY movement and the spread of open source hardware designs, millions of people could have global access to equipment design, so that people with disabilities, their families, and their allies can build equipment themselves, and have the information they need to maintain and repair their own stuff.

Since we can’t all do it ourselves or weld our own chairs, we also should encourage a different mindset for the industry. You can’t stand up all day at your desk, but you don’t need a doctor to prescribe you a $6000 office chair. A consumer model rather than a medical and charity model for mobility aids would treat wheelchairs simply as things that we use to help us get around, like cars, bikes, or strollers.

Small assistive devices such as reacher/grabbers, page turners and book holders, grip extenders, can be made with bits of rubber tubing, PVC pipe, and tools as simple as box cutters and duct tape. Rather than obsess over impossible levels of healthiness and longevity, we need to change people’s expectations of how they will deal with changing physical limitations. Popularizing simple designs, and a DIY attitude for mobility and accessibility gear, will encourage a culture of invention that will be especially helpful to people as they age.

This will be my first O’Reilly conference. No, wait, it won’t, I went to a huge impersonal scary Perl conference in about 1998, as a somewhat lonely programmer and the founder of Orange County Perl Mongers. But that’s another story. What I want to say here is, I really liked the O’Reilly conference registration site. It let me make my own profile and control it, rather than emailing a bio and info 12 months ahead of time. It lets me see all the other speakers and attendees, which is hugely important for me so that I can picture where I’m going to, how comfortable or hostile an environment it will be, whether I know *anyone* else there, how my talk will fit in with other talks, and so on; it helps to emphasize that people are the map. There are even social network features so that I am coming into the conference “friended” with a bunch of people and able to message back and forth with them. It is all very slick and very useful to me.

A conference is a social event. It makes sense to build social media around it. 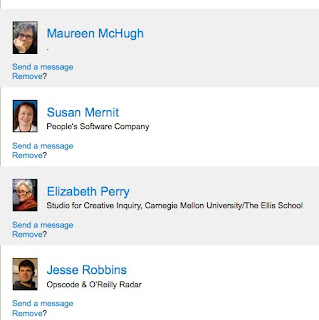 My sister Minnie, like so many other moms of young children, was looking for a social group for new moms. She left her Silicon Valley web developer job of 8 years to stay at home with her baby, and could not afford to pay for any extra child care. She found out about Blue Sky Family Club from an advertising flyer at the Emeryville Market in the San Francisco East Bay, announcing a new family club.

When she went to check it out with her free visit coupon from the flyer, her baby had a great time. Blue Sky was an upscale cafe, with coffee, beer, and wine, and a big play area with a kids’ and babies gym and great toys. “It was a large open space with natural light. They had a living room area with couches, an art area, a play house area, rock climbing wall, and gym, alongside the cafe.” Sounds great, doesn’t it? Minnie made the decision to pay the $170 fee for a 14 month unlimited membership.

One month later, Minnie got an email. The club would be shutting down. Membership fees would not be returned.

When Minnie first told me this story I assumed it was a sad tale of some half-assed Oakland hippies trying to create a co-operative. However, a little research uncovered a completely different story.

Blue Sky is the brainchild of Sheryl O’Loughlin, a marketing executive and former CEO. She is a high powered executive type who has now defrauded an unknown number of East Bay moms of their money. This is a person who has made a profit and a successful career from marketing to women and specifically to mothers. Apparently she and her husband Patrick are very concerned with “saving the planet” and making mindful decisions about buying organic produce. At the same time as they screw the “little people” out of their hard earned cash. What a great business plan!

Everyday I make my daily decisions mindfully – with an awareness of their potential impact on the environment. Whether it’s supporting my local farmers market and buying local, organic food for my family or working with my colleagues to source a new organic ingredient; I know that every decision matters. Each choice I make is a moment of reflection and an opportunity to lessen my impact on the environment. Through consistent, thoughtful and sustainable decisions, we are collectively changing the world.

The O’Loughlins announced the closure of their business, but apparently have not filed for bankruptcy.

In June 2007, bizjournals.com reported on the O’Loughlins’ plan for Blue Sky to become a local, then a national chain:

It will cost $3 million to open the first club. In addition to investing $100,000 of their own funds, the couple has managed to raise about $300,000 from private individuals in the last three months and they are continuing to look to angel investors and potential restaurant partners for backing. They expect roughly $1 million in leasing and tenant improvement funds from their future landlord. Their goal is to open four additional locations in five years.

Sounds like their venture capital money ran out. I can sympathize with an idealistic business plan and the financial turmoil that comes when an ambitious business plan fails. However, of all the creditors resulting from business failure, the *club’s individual members*, and their target market, should be paid back.

How many members were part of Blue Sky Family Club? I can’t imagine that membership was more than a few hundred. Say it was 300 members paying around 170 each – that’s about $50,000, probably less if you prorate the months of membership that passed for members who joined at different times. Let’s call it 35K. Do we seriously believe that Blue Sky’s founders don’t have that 35K? Why don’t they put their money where their business plan was?

Sheryl O’Loughlin should make the ethical business decision, sell some of her stock or put a second mortage on her house and pay back her investors. She has committed fraud and theft plain and simple. It is the kind of scam that upper class people get away with all the time. And they shouldn’t. Instead they go from board of directors to board of directors, scamming and keeping right on with their ski vacations. While someone who shoplifts a block of cheese goes right to jail and gets their life fucked up even more than poverty already has done. It’s disgusting.

“Doing a startup like this takes a tremendous amount of patience,” she says. “As a business person used to having things happen very fast, it’s like, take a breath, you’re going to get a million nos. You just have to keep plugging and believe in your ideas.”

This is a professional who wants to continue working in parenting-related products and marketing. She is now on the Board of Directors of a eco-food business called Nest Naturals. O’Loughlin’s bad business ethics should be exposed. Why would parents, her target market, trust her business sense after this spectacular failure of capital and basic decency? Who folds a business that has hundreds of members — members who in effect are micro-investors — and doesn’t even bother to declare bankruptcy? There are laws to protect creditors; in this case, a class-action lawsuit seems quite possible.

Blue Sky and other businesses who serve moms of young children should sit up and pay attention – and should not alienate their client base. Studies show that women pay more attention to the advice and information they get from their friends, whether online or off, than they do to corporate marketing or even other media channels. Moms talk, and moms listen to other moms. I would advise the (former) Blue Sky operators Sheryl O’Loughlin and Patrick O’Loughlin that paying back their customers’ membership fees is more than just ethical. It’s good business sense.