My friend and co-worker Jenny from Three Kid Circus pointed out a cool feature of Google Docs to me today. I use Google Docs spreadsheets mostly as wiki-like documents for a group of people to edit a web page in table form. In other words I use them for layout of a web page, and maybe for sorting columns, and sharing fairly simple information.

In another conversation I had recently, Elisa Camahort was talking about wanting a simple widget sort of thing for party RSVPs, but that would be more than a link to her email address – it would be a form for people invited to fill out. So, it occurred to me that the form-constructing capability in Google Docs would do all the things she wanted.

As I thought further, I realized it also might be helpful to my friend Squid Rosenberg, who has a son whose educational plan is managed by a fairly large group of people, using Google Docs, tracking his progress and patterns with a daily record. Similar documents could be very useful for anyone tracking health care issues, for a team of caregivers for an elderly person, for example.

Since this is a fairly new and obscure feature, and somewhat of a convoluted process to click around to where you even understand what the feature does, I thought I’d describe how to set it up.

2) Create a spreadsheet and call it “My potluck dinner” or whatever.

3) Make columns for whatever you like — name, email, # of people you’re bringing, what kind of food you will bring to the potluck.

8) Click “Choose recipients”. (You don’t have to put in any actual recipients.)

10) Copy the code and stick it in your blog

Each column in the spreadsheet shows up as a title and text input field in the form! You can also add new fields. 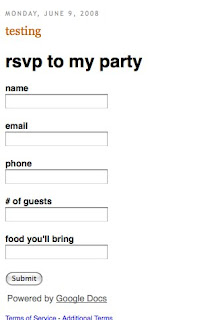 From there you might have to twiddle the formatting to make it look halfway decent. It is not set up to look nice in a blog sidebar, but it looks just fine in posts or pages in TypePad, and Blogger. It doesn’t work in LiveJournal or WordPress because it uses iframes, though in WordPress you can install a widget to get iframes to work.

The resulting input into the spreadsheet looks like this:

So, this could be useful for many purposes. My potluck dinner example is frivolous, but anyone who’s suffered through the annoying interface of the spreadsheets on Google Docs, or who uses them for individual or group data entry, could set up extremely easy web forms with this hidden-away feature.

I would like to send a polite nudge to the Docs development team to uncover the forms feature! It would be very nice if it were an option to click directly from the spreadsheet or other document.

The other day I was checking out the developer preview of Songbird‘s music player, and had a few ideas. Right now you can use it like a browser, reading blogs and downloading mp3s from those blogs. In about 5 minutes I had found great music from búscate un novio and fuck me i’m twee (I’ve been listening to a lot of girly pop/punk lately.)

I’d really love to change the whole model of music distribution. Rather than buying the rights to do whatever I like with a song, I’d like to download it and listen to it without feeling like a criminal. I’d like it to be licensed under Creative Commons in some sensible way. And then I’d like my music players to include a tip jar.

If I like a song, I’ll tip the artist, or the consortium of artists, or whoever does their distribution. For example, I’d like a guarantee that the original artist gets a particular percentage of the tip. Even if I knew they would get 50%, that would make me more likely to tip than I’d be if I had zero information.

Skyrocketing downloads, as music consumers felt the confidence that they weren’t doing anything illegal, would fuel the music industry. We’d tip a song, or an artist, more than once. When I made a mix CD for someone and put my favorite song on it, I might tip again. Over the many years of listening to a song, I might tip its creator many times… generating more money for the creator, and for anyone in the middle like Songbird could be, than a simple “pay 99 cents for it” model.

I’d see in my music player that I’d tipped 3 times for a particular song or album. I could sort my music on paid-for or not, which would encourage me to want to pay more artists and feel good about my own habits.

Further, I could earn a reputation as an ethical consumer. My own profile — on Songbird, or on some public site — maybe on a badge I stuck on my blogs — could proclaim that I’ve tipped musical artists 1052 times, or dollars worth of tips, in the last 5 years.

This information could build relationships between consumer and artist, or label or consortium. Kathleen Hanna would know that I’m her loyal fan to the tune of $30 over several years, and might send me announcements, concert information, free stuff, tshirts, or free new music.

This might also avoid the morass of micropayments. Create small payment structures for specific industries, instead of a grand scheme of people passing around the same .001th of a cent whenever they read a web page.

Well, I’m crossing over my day job into my personal blog here, but what the heck. I love my day job (and wikis) enough for it to merge that way! I’m turning into kind of a wiki fanatic, so much that a couple of months ago I realized I had the same sense of fannish belonging at our wiki meetup that I do at poetry readings, blogging meetups, and science fiction cons: the sense that I’m finally around other people who share some basic philosophy of reality that might not be quite mainstream. For poetry, it’s, well, being poety. For blogging, it’s that I don’t feel like anything is real until I’ve written it up and posted it to the Internet and had 6 people link to it. For sf cons, it’s that my brain has been steeped in the structures of alien societies since I was 5 years old, so much that I’m a Martian. In the case of wikis, that means that I want to collaborate on everything, and I want to be able to take everything back and travel backwards in time, and while I browse the non-wiki-ish Muggle web or even read a book, I get frustrated that I can’t double click on the page to edit the page.

This month I look forward to bringing up my pet peeves about wikis. Talk about wiki interoperability. I flip back and forth between wikis all the time, from Socialtext to Mediawiki to PBwiki to Kwiki, and can never remember which markup is which. In one, I have to use double square brackets, in another, single square brackets, to make a link. Not to mention the problems with quotes, pipes, header markup, and everything else. Why can’t they all just get along?

So here’s my wiki wednesday invite:

Anyone is welcome to give a quick presentation, demo, or talk on using wiki and social media technology. We have an interesting mix of developers, wiki entrepeneurs, wiki editors and administrators, bloggers, and consultants. I wrote up the last London and Palo Alto meetings, so you can get an idea of what happens at the event.

In San Francisco, we’ll be meeting at Citizen Space at 6pm. Eugene Eric Kim is giving a talk on wiki interoperability and wiki ohana. He’ll describe real-world end-user pain, concrete opportunities (especially ways Wiki developers can help the entire space by improving their own tools), and a practical strategy (WikiOhana) for achieving interoperability. This could lead into a great discussion! I’m hoping we’ll hear as well about events at Recent Changes Camp Montreal (RoCoCo), which Eugene wrote up with some excitement in his blog, eek speaks. Check out his writeups of the recent Identity conference, too, he has some fantastic ideas. And just a heads up, in July, Eszter Hargittai will be our featured speaker for the SF Bay Area.

In London, Wiki Wednesday has become a large and vibrant get together. David Terrar has created a Ning page as well as a signup page on the wiki. The meeting will be at 18:15 at the Conchango offices.

In Vancouver, the event so far has a high amount of wiki software developers. Check the Wiki Wednesday page for details.

In Montreal, there will be a focus on continuing the discussions at Recent Changes Camp, but also there will be time for wiki project explanations and demos.

Or on the upcoming.org invite:
http://upcoming.yahoo.com/event/200305/

Also, if you are interested in presenting at a future Wiki Wednesday, or would like to organize one in your city, please let me know.

Thanks a million to Wiki Wednesday organizers David Terrar, Luke Closs, and James Matheson, as well as to Tara Hunt and Chris Messina from Citizen Agency.

I leave you with this photo by George Kelly, because it made me laugh really hard: