When I heard that Dick Cheney had pulled a muscle and was going to be attending the inauguration in a wheelchair, I was filled with deadly fascination. How would that play out?

Would the inaugural ceremonies be even remotely accessible? Not bloody likely!

Would he self-propel, or would someone push him? Would the person pushing him be secret service, a family member, military, or a medical worker?

Would Cheney have a steel framed 70-pound hospital clunker of a wheelchair, or would it be halfway decent? My vote was for an x-frame Breezy, still cheap and easy to lay hands on, but under 40 pounds, maybe in red for its political symbolism value. Other wheelies I know were saying “No way, he’ll be in a clunker.” Even though I think that Cheney should (and WILL) go to jail for being a war criminal, I would have liked him to have a halfway decent wheelchair. Hell, I would personally have decorated it with the stars and stripes.

I imagined, and then later saw, Cheney being shovelled about from place to place behind the scenes, through freight elevators and dank back-hallways, maybe even a steam tunnel or two, carried ignominiously or bumped up backwards over some surprise steps no one thought about, and I felt a bit of schadenfreude there though I’m not proud of it. But I wondered, would anyone in power notice, a little bit more than they did before, what inaccessibility means, how excluding and alienating and humiliating it can be? Would anyone process, or whatever they were doing, with Cheney in his wheelchair, rather than leaving him to be tunnelled and elevatored and ramped while they triumphally process up and down majestic red carpeted staircases? 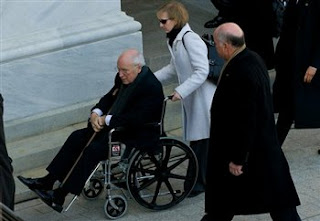 If you were enjoying their own moment of schadenfreude at the powerful man brought low, did you think about why wheelchair use was being brought low, was disempowering? Because it shouldn’t be.

Yes, I kind of giggled at the Dr. Evil jokes, but I also thought about them. Did you? Did you think on why they are a stereotype – how our stories have to give its villains a scar or “deformity” or a wheelchair (and a cat), using disability as a metaphor for being evil? I’m not saying don’t make the joke. I’m right in there posting the LOLcats of Blofeld-Cheney. But think next time you use the stereotype of the Evil Cripple.

I also certainly saw friends and strangers wishing permanent disability onto Cheney like it was a horrible fate, one that he deserved. I understand that is mostly just some anger talking. But this too exposes a bit of thinking in our society that people with illnesses or disabilities deserved them as a sort of punishment for wrongs or sins committed. I would like to invite people to think on that idea for a while. And think on this: why you think it might be such an awful fate for Cheney to use a wheelchair? Why is that? Do you think I have an awful fate? Do you pity me, to the extent that you would damn Cheney?

It was amazing to me, while I watched the inauguration, to see people I know from disability activism online, also Twittering and Facebook-chatting their reactions to Cheney’s de-inaugural wheelchair. Were you watching? Did you feel that strange agitation and excitement and curiosity?

What I felt was this:

How bitter, but how very expected, that the top levels of our own government, the most powerful men around, can’t pull it together to obtain a halfway decent wheelchair and decent access, for one of their own. That exposes the deep, deep ignorance in our country about access for people with disabilities, and how far we have yet to go.

(Have to add: I thought the Daily Show’s coverage of Cheney’s wheelchair was **hilarious**!! It starts at 2:32 in this video clip. He totally could have pushed it further!)