The last few months have been rough but I’m feeling much better and am back at work. Today, I appreciated that even though it was cold and raining, I was able to do all this:

All without painkiller and did I mention how nice it is to eat real food again after 3 months of gastritis (crackers and broth)? Food is so amazing. I’ve been thinking over my gratitude towards my friends and family for being around and taking care of me while I was so sick. My employer was super understanding about things too, which I appreciated.

Internally I battled the feelings that it was my fault I was so sick and simultaneously that I probably was not really so sick; if I just exerted more willpower I could magically overcome it. Neither of those things were true of course. It’s easy to know that intellectually without being able to believe it wholeheartedly. It is a flaw and a strength that I like to keep the illusion of control. Now that I feel better, I can look back and believe: OMG, I was incredibly ill and weak and unable to eat or barely move around! Every night I think for a minute how I got to the point where I couldn’t straighten out the blankets by myself. Ugh. Fuck that!

Meanwhile my friend Ron has been in and out of the hospital. We ended up in the same hospital on the same floor as next door neighbors at one point which was pretty hilarious. As so often over the years we’ve known each other he was someone i could rely on to chat with and know he totally understands, way better than I know it really, the experience of just carrying on with your life and interests and feelings in the middle of illness, pain, or physical limitation.

I often think over how many times I have been sick or extra limited in mobility and been afraid I will never bounce back. I have always bounced back! I am a badass! Even if I won’t get younger or any less disabled I will remain inherently BOUNCY. Keeping that in mind for next time. (Obviously, having money, support, privilege, and decent medical care also helps; I’m very lucky.)

Here is a photo of me holding up a giant table saw while wearing a tshirt with a stencil of a person in a wheelchair with flames coming out the back, 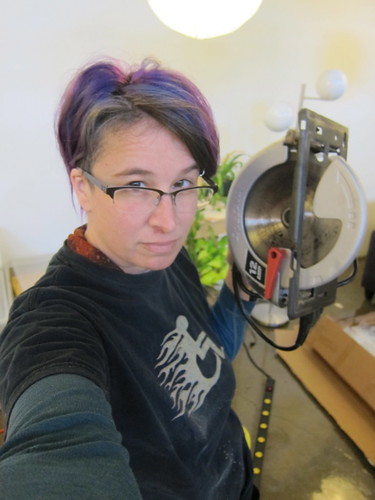 My extra nice news is that I have been driving my car a little bit, 10 or 20 blocks at a time. I’m not able to do that every day and it makes my leg and ankles hurt but wow it’s fun. I was right on the edge of selling the car. I had this moment driving the car back home from Double Union one night where i was singing along with Fairytale in the Supermarket and some other Raincoats song and crying at how nice it was to drive 20 blocks in my car independently. Ridiculous but true and I’ll never forget the feeling. Now I’m back to sometimes driving and using my manual wheelchair, which isn’t really better than scooter + bus, just different. I feel more nimble and sporty in the manual chair. It’s more fun for me if I’m indoors or have only a block or two to travel. It also makes taking a cab by myself easier to do, since I can disassemble and lift my manual chair (a Quickie Ti II) without any fuss. Going downhill once in a while is really fun (speed!!) and I love to balance and do wheelies, and the lights on the front wheels.

During the illness I was on a lot of painkillers and just needed to pass the time. I played Hoplite a little bit, nethack, and read all of Agatha Christie’s published detective novels and short story collections, taking notes on each book and vaguely thinking about what her stories reflected of history and social change. It seemed like a good “i’m going to be ill for at least 2 months” non-taxing goal. I felt a little sad to come to the end of her work. But not quite sad enough to find the paper versions of her romance novels that she published under the name Mary Westmacott. Maybe someday through the library.

My sacroiliac issues are acting up so it is tormenting me to be in pain all down my leg. Think “cranky old lady with sciatica”. The nerve pain makes my right leg cold-sensitive to the point where just room temperature air feels like a million ice needles. And sometimes my leg collapses without warning. Fuck that! Thank god the pain clinic moved up my back injection a month, so I get it next week (steroids + anesthetic in the s-i joint, takes me down for a few days but then is amazingly effective). I always forget how it is. I am nearly desperate enough to go back on lyrica or cymbalta or something. Nearly. Crazed with pain sometimes over here. Yet still functional to walk around. The last injection was in I think early October so I’m overdue for it. Maybe someday they can just fuse that thing or put in a metal plate or something. It seems like a very stupid and useless joint to have arthritis in.

Double Union is completely awesome. The kids and Oblomovka are great. I’m enjoying work and messing around with Python for work, looking forward to PyCon in April.

My hope now is to be able to keep up this pace of leaving the house a few times a week, make it into the office regularly, and start swimming again at the YMCA downtown. OK hopefully that’s off my chest now and I can write about other stuff like books, games, hackerspaces, feminism, and work!

3 thoughts on “Back in the saddle!”